the pharmacist advised me to take this to lose the stomach and hips.


On the box is written EXTRA STRONG DOSAGE and POWERFUL EFFECT.

and I can not find any opinion on it. 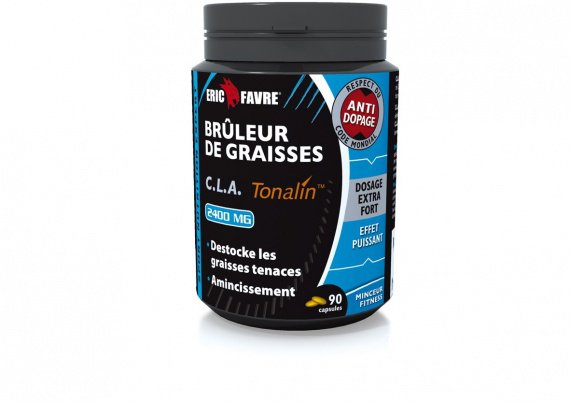 For info on CLA or CLA:


“Relationship between muscle mass and fat mass. Animal studies show that CLA causes a marked decrease in body fat and an increase in
muscle mass . Mechanisms of action have not yet been clarified and may differ from animal species to animal species. In humans, despite conflicting results, CLA appears to have a small, but significant effect.

A meta-analysis published in 2007 concludes that ingestion of 3.2 g of CLA per day leads to a
reduction in body fat, even if it remains modest (about 1 kg in 10 weeks). However, studies published since are not so conclusive.

In view of certain studies, the effect of CLA on the mass of fat can vary according to the overweight and the age of the subjects: it reduces it slightly or it has no effect. The sex of the participants in these studies, their genetic predisposition to accumulate fat and their nationality are also confounding factors that may explain the variations. For example, most trials indicating fat or weight loss have been carried out in Norway and Sweden.

Metabolic syndrome and diabetes. Results from preliminary animal studies have shown that CLA supplementation may increase insulin resistance, a side effect, or normalize glucose metabolism, a beneficial effect.

In human studies, CLA did not have a beneficial effect on
blood glucose levels. In people with obesity, CLA even increased glucose levels, as well as
insulin resistance .

According to the work of Swedish researchers, it is the “trans-10, cis-12” compound in CLA supplements that causes this side effect. It works against some potentially cardioprotective effects of CLA. ”

thank you, you answered me well, given that I am also insulin dependent diabetic, I had to speak to the pharmacist, and she advised me.

– 800g in 2 days (I don’t know if it comes from that, I continue a little bit, because my diabetes has not budged for the moment) and I think that it would be specified forbidden to the diabetic!

and we’ll see if that helps me lose faster.

We can have a difference of 1 kg, over a day, depending on the stool, water retention, etc …

the cla is used for fat storage, it should be combined with a fat burner that can be bought on food supplement sites

yes that’s why, we’ll see, it’s been a little while that I stagnate or same weight despite my diet, I lost 14 kg I still have 4 or 5 to lose and I can’t do it, so I test and if I lose them for me that would mean that it will have helped me anyway

don’t forget that the hygiene of life has a lot to do with it, fat burners will never replace cardio sessions, it’s a boost, nothing more

I don’t play sports, because I’m too tired (I already have 2 little monsters at home) but I eat balanced

it may be long

Hello, I allow myself to react to this subject which does not date back so long;

I myself started an Eric Favre program over 2 months in order to lose 5/6 unsightly kilos; I unfortunately find very few opinions on these programs and I would like to have testimonials. My main concern; my thighs ! So I will have appetite suppressant style tablets as well as a fat burner drink.

For those who would have tested, opinions? Thank you!


Tornado have you seen a change since you took the favre products?

I also let myself be seduced by this so-called miracle product. I started 3 days ago. I am waiting to see.

Well I started 5 days ago because I was traveling all last week so I was afraid of forgetting the tablets at lunchtime. So here since Saturday I got down to it; for the moment no change … except maybe today I don’t have the peckishness that I usually have around 5:30 p.m. / 6:00 p.m. but otherwise in 5 days my weight has not changed … I really hope to have results because this is not a cheap deal! And you MAISSA, do you have the same treatment as me? me it’s calorie negative + vital positive!

I have negative calories and their hyper draining product. The advisor that I had on the phone told me that the first week we did not lose anything but we refined and that we started to lose from the second week so suspense …. On the

other hand it is true that I no longer have this 10 a.m. dip (yes, it’s in the morning

) and at noon I don’t particularly want to sit down to eat.

I don’t know about you, but I had a questionnaire with my package to be called back by a dietician and the counselor told me that she would call me back to find out where my weight loss is. I find that rather serious on their part. We keep abreast of this development as and when you want! But considering the price, I hope it will work all this out

According to the adviser that I had online I also had to have the negative calorie + draining it well at least that’s what I thought I understood and finally I received instead of the draining of the positive vital; It’s not bad because I think my weight gain is due to stress a lot ^^

For the questionnaire since I was traveling when I received the package I did not return it on time so we will see if qq recontacts me anyway!

I really long to be able to feel the results

Yes me too!! your cure is over 2 months too? It is true that the last pounds to lose are stubborn !!!!

Yes, I received 2 months of treatment, what worries me is that I really did not find any reviews on the net !!!

yes it’s the same, but I saw that the products were sold on sites specializing in sport and nutrition dc well I deduce that it must be of quality …

just to see the evolution and hoping to see our pounds fly off !!!

Do I come to the news? So what was your first week like?

I weighed myself this morning and -1kg300 on the scale. I’m not telling you how happy I am, I weighed myself 3 times to see if the scale was working well. I hope it will continue to drop. I am starting to believe that this product really works. I have not changed anything in my diet or my lifestyle … in any case it motivates for the future

Tell me what it is for you.

Hello! you are much luckier than me because i started exactly a week ago and i have lost absolutely nothing

i am at the same weight as last saturday! I’m a little disgusted ….

And in your clothes you do not see the difference? maybe you haven’t lost anything on the scale but your body has moved a little

What should I conclude? especially since the diet I am doing is supposed to work thoroughly …

What do you do for a diet?

dukan I already did it last year I lost 10kilos …

and for the 6kilos that I have left I wanted to combine the diet + the negative calories so I don’t understand why I do not persevere; especially since I did not make 0 difference in the diet

Dukhan I’m not too much of a fan … you miss everything … I did it and honestly I find it super hard and once the pounds have been lost you have to be super careful because you take them back. Did you try to go see a dietician? Do you do some sport or not?

yes I do a lot of sport and that’s why I find it all the more discouraging not to have even lost 100grams in a week !!! and besides, I don’t feel that it cuts my hunger any more than that … I’m desperate, why doesn’t it work on me ?!